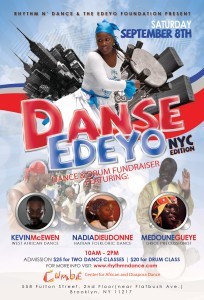 Join us on September 8th, 2012 as we host our next Haiti fundraiser, Danse Edeyo, the New York Edition!  That’s right!  This time we’re taking the movement up the Jersey Turnpike to the Tri-State area!

The Edeyo Foundation is partnering with Rhythm N Dance to bring you a day of dance and drum workshops to continue our support of the Joyous Heart School in Port-Au-Prince Haiti.

The event will be located in the heart of Brooklyn, at the Cumbe Center for African and Diaspora Dance, located at 558 Fulton Street, 2nd Floor (near Flatbush Ave.) Brooklyn, NY 11217.

We will start the event off with a drum class by the Griot Medoune Yacine “Dame” Gueye. 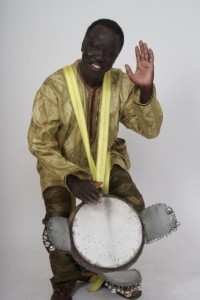 “Dame Gueye”- has served as the Director of Music for the renowned KANKOURAN West African Dance Company for over 15 years. Born in Colobane Dakar Senegal , Medoune is the son of a great “Griot”-Abdou Karim Gueye, who not only was instrumental in his drum training, but also instilled a great sense of pride for his country and a love for its traditions. As a Senegalese “Griot” Mr. Gueye is well known for his proficiency and unique technique in several indigenous drum styles and rhythms. He has created compositions and arrangements of traditional drum rhythms for several choirs, African dance companies, theatrical productions, local contemporary
musicians and university dance departments across the nation and abroad. To his credit, in 1998 he premiered his first CD, of a series, entitled, “Djinfoly”.

Dame’s drum class will be followed by a West African Dance class taught by Rhythm N Dance’s own Kevin McEwen. 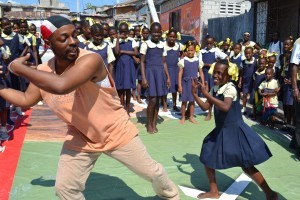 A native of Brooklyn New York, Kevin’s love for dance and culture goes back to the early days of break dancing and reggae dancehall competitions across the city. After relocating to the Washington DC area, it is here where he first saw KanKouran West African Dance Company perform at a Black History month event in 2001. After meeting KanKouran’s founder and Artistic Director, Assane Konte, Kevin was invited to community class, where he learned many of the various techniques from Senior Company Members and then joined the senior company after two years of apprenticeship. Kevin’s dance career with KanKouran gave him a foundation in West African dance, which has proved invaluable as he broadened his dance repertoire by studying under dance masters to include Afro Cuban, Afro Jazz, and various Modern/Contemporary
techniques.

The finale part of the event will be a class in Haitian dance taught buy our featured artist, Ms. Nadia Dieudonné. 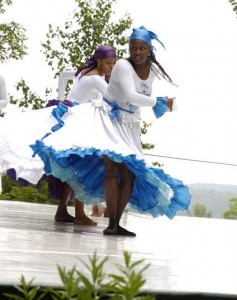 Nadia  has a lifetime of experience in traditional Haitian dance. By the age of 12 years she was performing with the well known Haitian folk singer and activist Myriam Dorismé. Today, after more than 15 years of dancing, Nadia is regarded as one of the best Banda dancers outside of Haiti. She regularly returns to the island where she attends various Lakous (rural communities that preserve and practice Vodou), deepening her skills and understanding of the traditional practice. In 1994, Nadia founded Feet of Rhythm Afro-Haitian Dance Company, which was created to preserve and promote the rich cultural traditions of Haiti. Feet of Rhythm has been featured at several venues within the US and abroad. Since 1995, through her creation of the Feet of Rhythm Kids Cultural Program & Dance Company, Nadia has taught Haitian music and dance in public schools, community based organizations, and daycare centers. Nadia has also conducted adult master classes at several prestigious institutions, including New York University, Lincoln Center, and the Katherine Dunham Dance Institute. She is currently pursuing a graduate degree in Dance Education at NYU. Classes focus on the folkloric repertoire of Haitian dance, and choreographed elements and movements of traditional dances.

We hope to see you all out there, so spread the word and we’ll see YOU on the dancefloor!!