With the members of Rhythm N Dance working with the Edeyo Foundation for the past two years, we were really excited about the opportunity to return to the Joyous Heart school to conduct our workshops in African Dance, Drum and Song technique. Our first trip to Haiti in 2011 provided us a foundation to expand on our work in 2012.

When we initially came to the Joyous Heart school in 2011, we had four classes, which lead up to a performance right outside of the school.  This year, we wanted to do a full performance, which included not just learning traditional West African dance, but we wanted to add song classes as well as costumes for the children to perform in!

Our workshops with the kids took place over the span of four days after the kids were done with their school lectures and lunch. Griot Percussionist Medoune Gueye (http://www.damegueye.com) is a Foreign National from Dakar, Senegal.  His ability to communicate with and work with children was invaluable during our time in Haiti. Medoune Gueye (or as everyone calls him, Papa Dame) lead the children in the instruction of several songs of the SeneGambia region of West Africa, with the song for the dance BALANTA (BA-LAN-TA) being the kids favorite (you could hear them singing the song as they went home from school all the way down the block after the workshop was done!).

With Papa Dame working on the songs with the children, it was my responsibility to work on the dance choreography that coincided with the songs they learned.  I separated the kids by age (and gender) knowing that some of the older kids had taken class with me before.  The older group of girls learned the BALANTA dance, while I separated the boys from the girls so that I could work with them using the warrior dance DOUDOUMBA (DOU-DOUM-BA), which comes from the people of Guinea, West Africa.  As a male dancer, it is important for me to uplift and encourage the male principle within our young men so that they do not feel that they have to give up their male identity for the sake of learning how to dance within the world of performing arts. 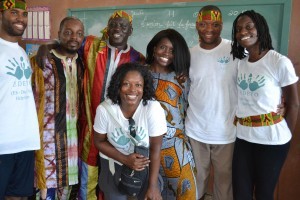 Each child who participated in the performance got their own costumes, which where put together by the collective efforts of both Jamel James team (basketball camp) AND Rhythm N Dance’s team.  We both worked well as a collective and even had some of them participate in our efforts as drummers during the final performance for Mommie Maude and the rest of the students at the school!

As with any trip I’ve made to the Joyous Heart School, it’s always hard to leave those young ones, but I know that the effort that was given in our work for those several days was definitely appreciated.

Special “Thank You” to Doris Pradieu’s work in providing us this opportunity to give back to the people of Haiti for these past two years, as well as Jamel James and Preston Roberts for their support on the drums during our performance! They say that it takes a nation to raise a child, well in Edeyo’s case, the nation is here and ready to support these young people by any means necessary!